Christmas Trees from Around the World,
Twelve Days of Christmas, and
Christmas at Arlington National Cemetery

● Christmas Trees from Around the World, Dec. 2010
● Twelve Days of Christmas
● Christmas at Arlington National Cemetery


Christmas Trees from Around the World, December 2010: 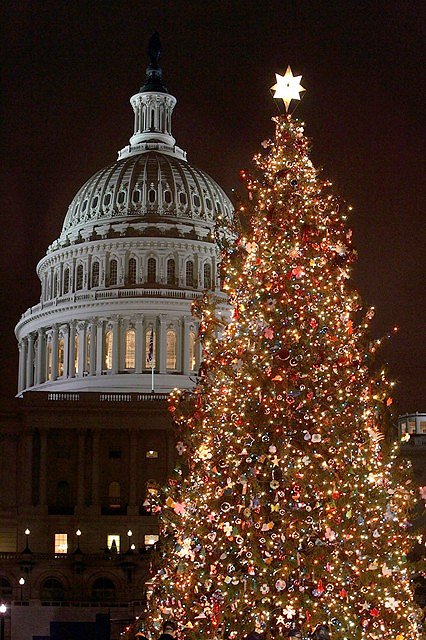 1. The Capitol Christmas tree in Washington, D.C. is decorated with 3,000 ornaments that are the handiwork of U.S. schoolchildren. Encircling evergreens in the 'Pathway of Peace' represent the 50 U.S. states. 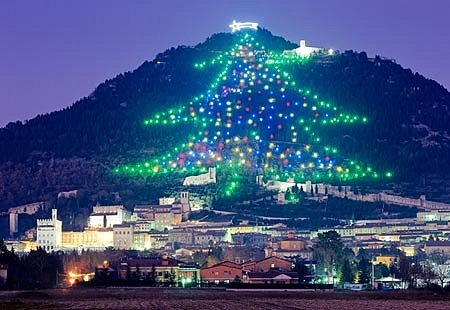 2. The world's largest Christmas tree display rises up the slopes of Monte Ingino outside of Gubbio, in It'saly's Umbria region. Composed of about 500 lights connected by 40,000 feet of wire, the 'tree' is a modern marvel for an ancient city. 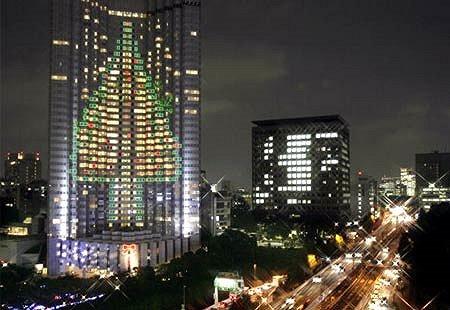 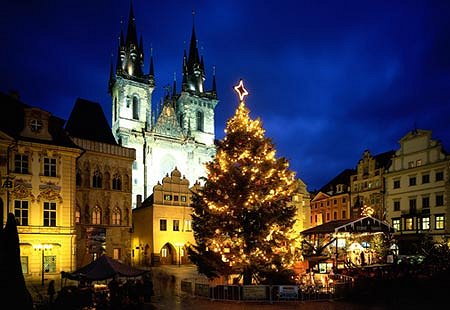 4. Illuminating the Gothic facades of Prague's Old Town Square, and casting its glow over the manger display of the famous Christmas market, is a grand tree cut in the Sumava mountains in the southern Czech Republic. 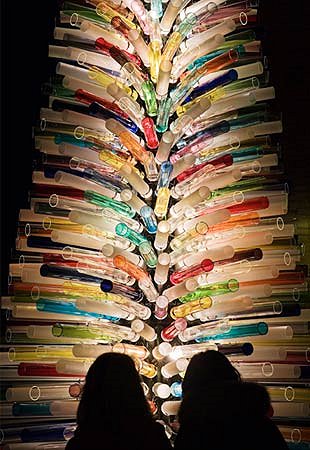 5. Venice's Murano Island renowned throughout the world for its quality glasswork is home to the tallest glass tree in the world. Sculpted by master glass blower Simone Cenedese, the artistic Christmas tree is a modern reflection of the holiday season. 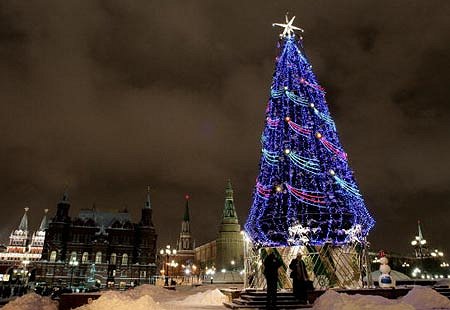 6. Moscow celebrates Christmas according to the Russian Orthodox calendar on Jan. 7. For weeks beforehand, the city is alive with festivities in anticipation of Father Frost's arrival on his magical troika with the Snow Maiden. He and his helper deliver gifts under the New Year tree, or yolka, which is traditionally a fir. 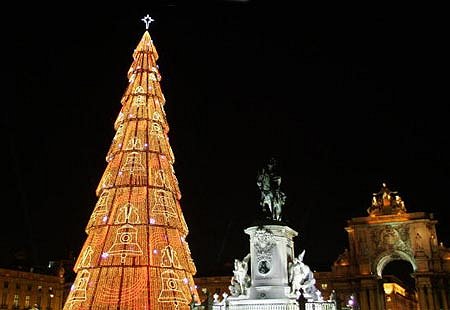 7. The largest Christmas tree in Europe (more than 230 feet tall) can be found in the Praça do Comércio in Lisbon, Portugal. Thousands of lights adorn the tree, adding to the special enchantment of the city during the holiday season. 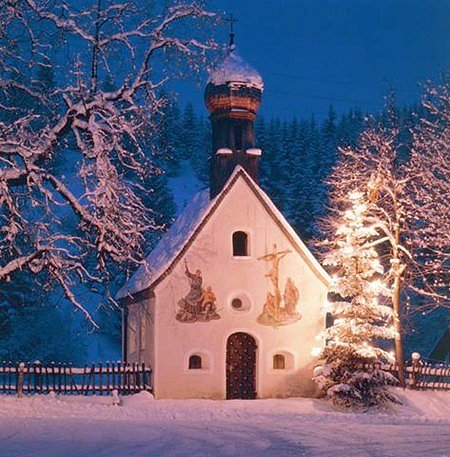 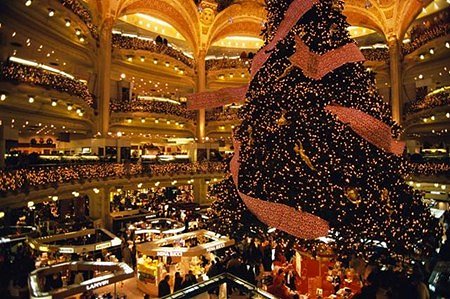 9. Ooh la la Galeries Lafayette! In Paris, even the Christmas trees are chic. With its monumental, baroque dome, plus 10 stories of lights and high fashion, it is no surprise that this show-stopping department store draws more visitors than the Louvre and the Eiffel Tower. 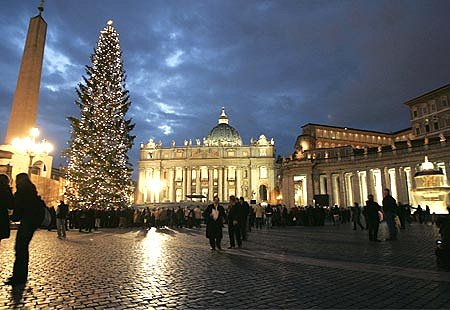 10. In addition to the Vatican's heavenly evergreen, St. Peter's Square in Rome hosts a larger-than-life nativity scene in front of the obelisk. 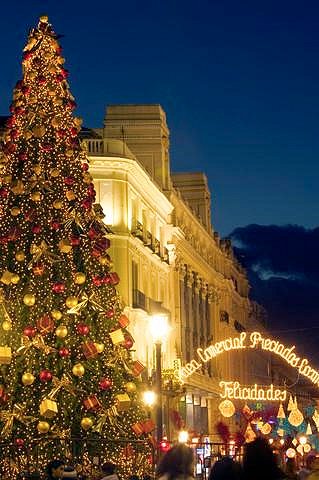 11. The Christmas tree that greets revelers at the Puerta del Sol is dressed for a party. Madrid's two-week celebration makes millionaires along with merrymakers. On Dec. 22, a lucky citizen will win El Gordo (the fat one), the world's biggest lottery. 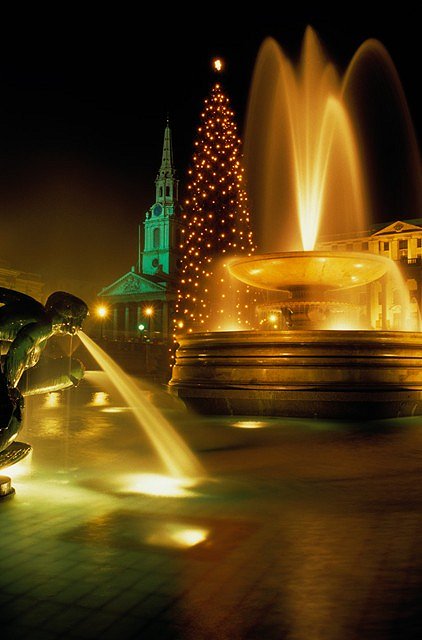 12. A token of gratitude for Britain's aid during World War II, the Christmas tree in London's Trafalgar Square has been the annual gift of the people of Norway since 1947. 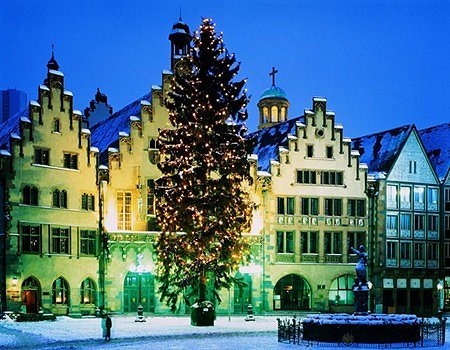 13. Drink a glass of gluhwein from the holiday market at the Romer Frankfurt's city hall since 1405 and enjoy a taste of Christmas past. 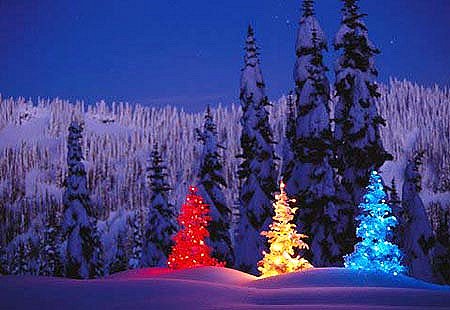 14. Against a backdrop of tall, shadowy firs, a rainbow trio of Christmas trees lights up the night (location unknown).

The Story behind the Twelve Days of Christmas 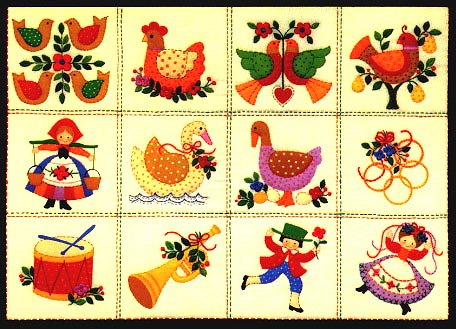 There is one Christmas Carol that has always baffled me.

What in the world do leaping lords, French hens, swimming swans, and especially the partridge who won't come out of the pear tree have to do with Christmas?

This week, I found out.

From 1558 until 1829, Roman Catholics in England were not permitted to practice their faith openly. Someone during that era wrote this carol as a catechism song for young Catholics. It has two levels of meaning: the surface meaning plus a hidden meaning known only to members of their church. Each element in the carol has a code word for a religious reality which the children could remember.

● The partridge in a pear tree was Jesus Christ.
Jesus.

● The eight maids a-milking were the eight beatitudes.
The Eight Beatitudes of Jesus.

(1) You shall worship no other gods.

(2) You shall not make yourself a graven image, or any likeness of anything . . . ; you shall not bow down to them or serve them ...

(3) You shall not misuse the name of the Lord your God.

(4) Remember the sabbath day to keep it holy.

(5) Honor your father and your mother.

(6) You shall not commit murder or manslaughter.

(7) You shall not commit adultery.

(8) You shall not enslave [another free Israelite].

(9) You shall not bear false witness against your neighbor.

(10) You shall not make a wrongful attempt to acquire your neighbor's possessions, including his servants, his animals, or his wife.

Judas Iscariot was the twelfth disciple but since he betrayed Jesus he is not considered as one of the 11 faithful.

● The twelve drummers drumming symbolized the twelve points of belief in The Apostle's Creed.

1. I believe in God the Father Almighty, Maker of Heaven and earth.

2. and in Jesus Christ, His only Son, our Lord

3. who was conceived by the Holy Spirit, born of the virgin Mary,

4. suffered under Pontius Pilate, was crucified, died, and was buried: He descended into Hell:

5. the third day He rose again from the dead.

6. He ascended into Heaven,

7. and sits at the right hand of God the Father Almighty.

8. From thence He shall come to judge the living and the dead.

9. I believe in the Holy Spirit,

10. one holy Christian Church, the fellowship of saints,

11. the forgiveness of sins,

12. the resurrection of the body, and the life everlasting.

Remember: the Twelve Days of Christmas are the 12 days following December 25th. The Christmas Season runs until Epiphany, January 6. 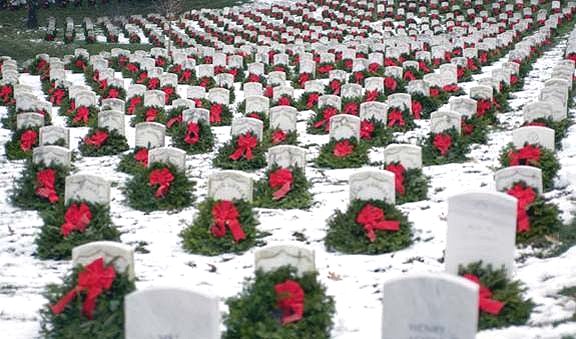 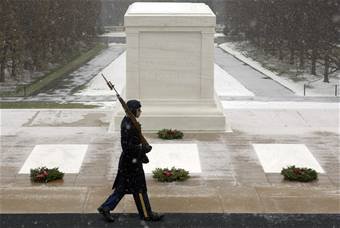 Readers may be interested to know that these wreaths (over 5000) are donated by the Worcester Wreath Co. of Harrington, Maine. The owner, (his name is actually Morill Worcester, not Merrill), Christmas Wreaths at Arlington Cemetery - Truth! Merrill Worcester, not only provides the wreaths, but covers the trucking expense as well. He's done this since 1992. A wonderful guy. Also, most years, groups of Maine school kids combine an educational trip to DC with this event to help out. Making this even more remarkable is the fact that Harrington is in one the poorest parts of the state.

Arlington Wreath ProjectYouTube video, 7:09 min. Published on Oct 12, 2006 by WreathsAcrossAmerica. "Each year Worcester Wreath Company donates 5000 wreaths to be placed on the graves at Arlington National Cemetery to honor our Veterans during the holidays."

Arlington Christmas Wreath Project YouTube video, 2:43 min. Published on Dec 18, 2006 by David Dennis. This is an ABC News story about one man's gift of Christmas Wreaths each year.