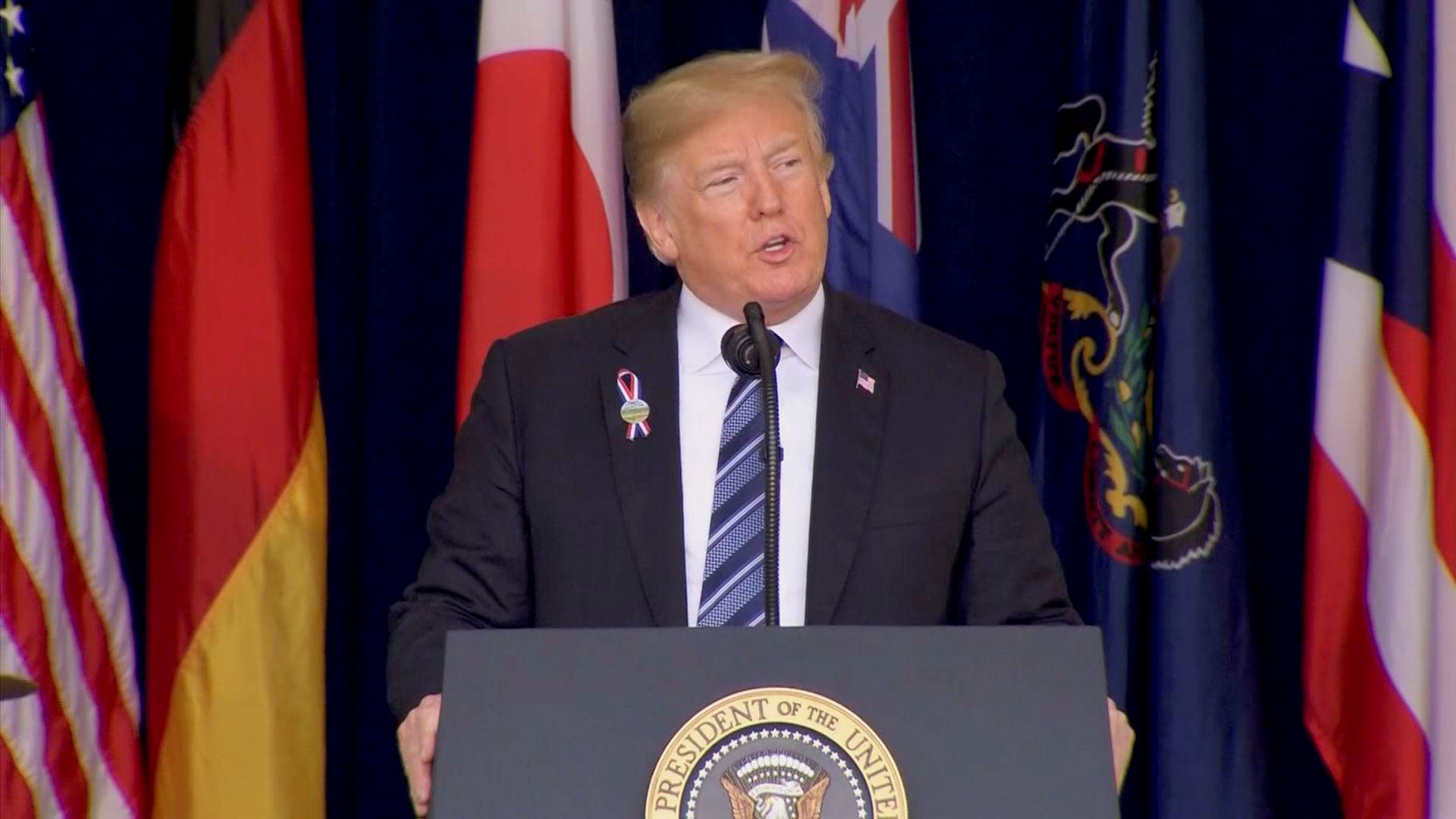 ● President Donald Trump Full Speech: Honors 9/11 Victims at Shanksville Memorial | NBC News. YouTube video, 15:38 min. Published on Sep 11, 2018 by NBC News. In a 9/11 memorial speech in Shanksville, PA, President Trump hailed the men and women of Flight 93 who "took control of their destiny and changed the course of history."

● President Trump Speaks at Flight 93 Memorial Service. CNBC video, 4:31 min. Trump: 9/11 memorial is where heroes 'stopped the forces of terror' by Christina Wilkie, Published Tue, 11 Sept 2018.
President Donald Trump on Tuesday [September 11, 2018] told the families of the victims of Flight 93 that their loved ones "stopped the forces of terror."
"A piece of America's heart is buried on these grounds," Trump told guests at a memorial service in Shanksville, Pennsylvania, at the site of the crash of United Airlines Flight 93 on Sept. 11, 2001.

Note: Flight 93 National Memorial from Wikipedia. "The Flight 93 National Memorial is located at the site of the crash of United Airlines Flight 93, which was hijacked in the September 11 attacks, in Stonycreek Township, Somerset County, Pennsylvania, about 2 miles (3.2 km) north of Shanksville, and 60 miles (97 km) southeast of Pittsburgh.
Of the four aircraft hijacked on September 11, Flight 93 is the only one that did not reach its intended target, presumed to be the United States Capitol in Washington, D.C. Several passengers and crew members made cellular telephone calls aboard the flight and learned about the attacks on the World Trade Center in New York City and the Pentagon in Arlington County, Virginia. [The Pentagon, headquarters of the United States Department of Defense, is located in Arlington County, Virginia, across the Potomac River from Washington, D.C.] As a result, the passengers and crew members [of Flight 93] decided to mount an assault against the hijackers and wrest control of the aircraft. The plane crashed in a field in Stonycreek Township, Pennsylvania, about 150 miles (240 km) northwest of Washington, D.C., killing all 39 civilians, a U.S. Fish and Wildlife Service officer, and four terrorists aboard." See also United Airlines Flight 93 from Wikipedia.

● Remarks by President Trump at Flight 93 September 11 Memorial Service. Issued on: September 11, 2018 by the Whitehouse.

This full text version is from the Whitehouse: Remarks by President Trump at Flight 93 September 11 Memorial Service. September 11, 2018, 9:49 A.M. EDT.

THE PRESIDENT: "Thank you, General. Thank you very much, ladies and gentlemen.

I want to thank you, Secretary Mattis, General Dunford, members of the Cabinet, members of the Armed Forces, first responders, and most importantly, to the families and to the survivors: It's an honor to join you on this very, very solemn occasion. This is an occasion that is extraordinary, and it will always be extraordinary.

Before we begin, I'd like to send our nation's prayers to everyone in the path of Hurricane Irma and to everyone suffering through the devastation of Hurricane Harvey. These are storms of catastrophic severity, and we're marshaling the full resources of the federal government to help our fellow Americans in Florida, Alabama, Georgia, Texas, Louisiana, Tennessee, and all of those wonderful places and states in harm's way.

When Americans are in need, Americans pull together — and we are one country. And when we face hardship, we emerge closer, stronger, and more determined than ever.

We're gathered here today to remember a morning that started very much like this one. Parents dropped off their children at school. Travelers stood in line at airports and getting ready to board flights. Here at the Pentagon and at offices all across the country, people began their early meetings.

Then, our whole world changed. America was under attack. First at the World Trade Center, then here at the Pentagon, and then in Pennsylvania. The horror and anguish of that dark day were seared into our national memory forever. It was the worst attack on our country since Pearl Harbor and even worse because this was an attack on civilians — innocent men, women, and children whose lives were taken so needlessly.

For the families with us on this anniversary, we know that not a single day goes by when you don't think about the loved ones stolen from your life. Today, our entire nation grieves with you and with every family of those 2,977 innocent souls who were murdered by terrorists 16 years ago.

Each family here today represents a son or daughter, a sister or brother, a mother or father, who was taken from you on that terrible, terrible day. But no force on Earth can ever take away your memories, diminish your love, or break your will to endure and carry on and go forward. Though we can never erase your pain, or bring back those you lost, we can honor their sacrifice by pledging our resolve to do whatever we must to keep our people safe.(Applause.)

On that day, not only did the world change, but we all changed. Our eyes were opened to the depths of the evil we face. But in that hour of darkness, we also came together with renewed purpose. Our differences never looked so small, our common bonds never felt so strong.

The sacrificed [sanctified] grounds on which we stand today are a monument to our national unity and to our strength. For more than seven decades, the Pentagon has stood as a global symbol of American might. Not only because of the great power contained within these halls, but because of the incredible character of the people who fill them. They secure our freedom, they defend our flag, and they support our courageous troops all around the world.

Among the 184 brave Americans who perished on these grounds were young enlisted servicemembers, dedicated civil servants who had worked here for decades, and veterans who served our nation in Korea, in Vietnam, and in the Middle East. All of them loved this country and pledged their very lives to protect it.

That September morning, each of those brave Americans died as they had lived: as heroes doing their duty and protecting us and our country. We mourn them, we honor them, and we pledge to never, ever forget them. (Applause.)

We also remember and cherish the lives of the beloved Americans who boarded Flight 77 at Dulles Airport that morning. Every one of them had a family, a story, and beautiful dreams. Each of them had people they loved and who loved them back. And they all left behind a deep emptiness that their warmth and grace once filled so fully and so beautifully.

The living, breathing soul of America wept with grief for every life taken on that day. We shed our tears in their memory, pledged our devotion in their honor, and turned our sorrow into an unstoppable resolve to achieve justice in their name.

The terrorists who attacked us thought they could incite fear and weaken our spirit. But America cannot be intimidated, and those who try will soon join the long list of vanquished enemies who dared to test our mettle. (Applause.)

In the years after September 11th, more than 5 million young men and women have joined the ranks of our great military to defend our country against barbaric forces of evil and destruction. American forces are relentlessly pursuing and destroying the enemies of all civilized people, ensuring — and these are horrible, horrible enemies — enemies like we've never seen before. But we're ensuring they never again have a safe haven to launch attacks against our country. We are making plain to these savage killers that there is no dark corner beyond our reach, no sanctuary beyond our grasp, and nowhere to hide anywhere on this very large Earth.

Since 9/11, nearly 7,000 servicemembers have given their lives fighting terrorists around the globe. Some of them rest just beyond this fence, in the shrine to our nation's heroes, on the grounds of Arlington National Cemetery. They came from all backgrounds, all races, all faiths, but they were all there to dedicate their lives, and they defend our one great American flag. (Applause.)

They — and every person who puts on the uniform — has the love and gratitude of our entire nation.

Today, as we stand on this hallowed ground, we are reminded of the timeless truth that when America is united, no force on Earth can break us apart — no force.

On the morning of 9/11, Pentagon Police Officer Isaac Ho'opi'i and — a special person — was one of many heroes whose love for his fellow Americans knew no bounds. He was a mile away when he got the call over his radio that a plane had crashed into the Pentagon. He sped to the scene and raced into smoke and fire. Few people would have done it. He ducked under live electrical wires and trudged through puddles of jet fuel only steps away from sparks and from vicious flame.

In the pitch black, he began calling out people in need of help. Isaac heard faint voices and he wanted to answer those faint voices. One by one, he carried people out of the burning rubble. He kept going back into the smoldering darkness, calling out to anyone who could hear, anyone who was alive. He saved as many as 20 people who had followed his voice; he carried eight himself.

For nearly 36 hours, Isaac kept on saving lives, serving our nation, and protecting our safety in our hour of need. And today, Isaac continues to do exactly that. Isaac still works at the Pentagon, now as a sergeant. e's on duty right now, and he's joined us here today for the ceremony. And this morning, all of us — and all of America — thank Isaac for his service. Where is Isaac? (Applause.) Thank you. Thank you, Isaac. Thank you.

To Isaac and to every first responder and survivor of the attack, you carry on the legacy of the friends you lost. You keep alive the memory of those who perished. And you make America proud — very, very proud.

Here on the west side of the Pentagon, terrorists tried to break our resolve. It's not going to happen. But where they left a mark with fire and rubble, Americans defiantly raised the stars and stripes — our beautiful flag that for more than two centuries has graced our ships, flown in our skies, and led our brave heroes to victory after victory in battle. The flag that binds us all together as Americans who cherish our values and protect our way of life. The flag that reminds us today of who we are, what we stand for, and why we fight.

Woven into that beautiful flag is the story of our resolve. We have overcome every challenge — every single challenge, every one of them — we've triumphed over every evil, and remained united as one nation under God. America does not bend. We do not waver. And we will never, ever yield.

So here at this memorial, with hearts both sad and determined, we honor every hero who keeps us safe and free, and we pledge to work together, to fight together, and to overcome together every enemy and obstacle that's ever in our path.

Our values will endure. Our people will thrive. Our nation will prevail. And the memory of our loved ones will never, ever die.

Thank you. May God bless you. May God forever bless the great United States of America. Thank you very much. (Applause.)"