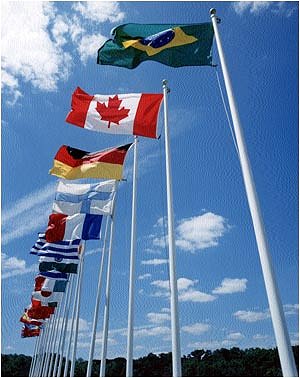 The goal of this page is to provide suggested Web links to assist students to conduct research to:
* Analyse the global distribution of Canada's major international agreements and organizations;
* Explain the mandate of selected international organizations to which Canada belongs;
* Evaluate their effectiveness in addressing global concerns; and
* Demonstrate knowledge of Canada's significant world contributions.

Nine New Realities: Issues Facing Canada in the International Arena. Introduction, Background, Early History, New Developments in Canada, What Has Canada Done? Canada's Contributions, Canada's Position, A Critical Look at Canada's Contribution, How We Got Where We Are Today, Canada's Relations with Asia and the United States, Other Contemporary Issues, Who Are Canadians today? Multiculturalism, Forces Driving Our Connectivity, Canadian Diversity in a Globalizing World, Canadian Cities: International Context, The State of Canadian Cities, Future Directions:

Like Water on Stone: The Story of Amnesty International (Hardcover) by Jonathan Power. Click Look Inside to view 29 sample pages of the book. See Front flap for info on the year the organization began.

Canadian Council for International Co-operation (CCIC) from Global Hand. "CCIC is a coalition of about 100 Canadian organisations working for the elimination of poverty in Canada and overseas. CCIC is involved in the analysis of Canada's aid, trade, and foreign policy, as well as promoting the humanitarian aid and transition-to-peace issues of its members."

Diplomat and International Canada. "Diplomat & International Canada magazine is a leading source for international affairs and Canadian foreign policy. Diplomat is the magazine for people who want to stay informed about global issues and who care about Canada's role in the world. It is also a showcase for the diplomatic community in Canada." See also: Paterson Review Archives - An online journal published by the graduate students of the Norman Paterson School of International Affairs. Canada in International Headlines.

Greenpeace: How a Group of Ecologists, Journalists, and Visionaries Changed the World (Hardcover) by Rex Weyler

Greenpeace from Wikipedia, the free encyclopedia.

Greenpeace Canada. Contents: About Greenpeace. Mission: "Greenpeace seeks to: Protect biodiversity in all its forms; Prevent pollution of the earth's oceans, land, air and fresh water; End all nuclear threats; Promote peace, global disarmament and non-violence." History of Greenpeace in Canada and around the world, Organizational Profile, Environmental Campaigns: Climate and Energy, Forests, and Genetic Engineering, Quick Facts: Greenpeace was founded in Canada in 1971, and more.

The Greenpeace Mission Statement. "Greenpeace is an independent, nonprofit, global campaigning organization that uses non-violent, creative confrontation to expose global environmental problems and their causes.
Greenpeace's goal is to ensure the ability of Earth to nurture life in all its diversity ..."

IDRC - The International Development Research Centre is a public corporation created by the Parliament of Canada in 1970 to help developing countries use science and technology to find practical, long-term solutions to the social, economic, and environmental problems they face.

International Development Research Centre (IDRC) from Wikipedia, the free encyclopedia. The IDRC is a Canadian crown corporation that supports researchers from the developing world in their search for the means to build healthier, more equitable, and more prosperous societies.

International Development Research Centre (IDRC) from Source Watch. "A public corporation created by the Parliament of Canada in 1970 to help developing countries use science and technology to find practical, long-term solutions to the social, economic, and environmental problems they face."

The International Development Research Centre (IDRC) from Canadian Encyclopedia. The IDRC was established as a public corporation by Parliament in 1970 to support research designed to adapt science and technology to the specific needs of developing countries. The first chairman was Lester B. Pearson. Headquartered in Ottawa, the Centre has 6 regional offices around the world.

Canada and NATO: A Starving Fish in an Expanding Pond by Michael J. Lawless. "The history of Canada's relationship with NATO is one of which Canadians can be justifiably proud. A key contributor to the creation of the Alliance, and the architect of the Canada Clause that served to generate the second of the dual purposes of the Alliance (the creation of an economic relationship between states as the vehicle for the creation and maintenance of peace), Canada has been successful in using the Alliance to affect its national goals."

Canada-NATO relations from Wikipedia. Canada has been a member of the North Atlantic Treaty Organization (NATO) since its inception in 1949. Canada was not only a member but one of the principal initiators of the alliance.

Canada in NATO. The North Atlantic Treaty Organization. The North Atlantic Treaty was signed in Washington on April 4, 1949. Canada has been a member of NATO since it was founded in 1949. Since 1949, Canada has been the sixth largest contributor to NATO's military and civil budgets. Canada is the third largest supporter of the NATO Airborne Early Warning system. In 2005-06, Canada contributed some $40 million and 114 personnel.

NORAD (North American Air Defence Agreement) from Canadian Encyclopedia. "NORAD was announced on 1 August 1957; renamed North American Aerospace Defence Command in 1981, it integrates the air-defence forces of the US and Canada under a joint command at Colorado Springs, Colorado."

North American Aerospace Defense Command (NORAD) from Wikipedia, the free encyclopedia. "A joint organization of the United States and Canada that provides aerospace warning and control for North America. It was founded on May 12, 1958, as the North American Air Defense Command. Since 1963, NORAD's main technical facility has been the Cheyenne Mountain Operations Center in Colorado, and for this reason NORAD is sometimes unofficially referred to as Cheyenne Mountain."

Canada and the United Nations from Government of Canada: Foreign Affairs, Trade and Development Canada.

Canada and the United Nations from Wikipedia, the free encyclopedia.

The United Nations (UN) from Canadian Encyclopedia. The United Nations began in 1945 as a loosely co- ordinated international system of deliberatory bodies, functional agencies and temporary and permanent commissions with headquarters in New York, Geneva and elsewhere. By population, Canada ranks about 40th in the world, and among the Western industrialized nations it ranks 7th, but it is the 4th largest financial contributor to the UN system.

Charter of the United Nations. We the Peoples of the United Nations determined to save succeeding generations from the scourge of war, which twice in our lifetime has brought untold sorrow to mankind, ... Introductory Note, Preamble, and all 19 Chapters of the U.N. Charter available online.

How the United Nations Works from How Stuff Works.

UN - United Nations. The purposes of the United Nations are to maintain international peace and security; to develop friendly relations among nations; to cooperate in solving international economic, social, cultural and humanitarian problems and in promoting respect for human rights and fundamental freedoms; and to be a centre for harmonizing the actions of nations in attaining these ends.

The United Nations Association in Canada (UNA-Canada). A national charitable organization established in 1946. Mandate is to engage the Canadian public in the work of the United Nations and the critical international issues.

UNESCO from Wikipedia, the free encyclopedia. United Nations Educational, Scientific and Cultural Organization (UNESCO) is a specialized agency of the United Nations established on 16 November 1945. UNESCO has 193 Member States and 6 Associate Members. The organization is based in Paris.

UNICEF Canada is guided by the vision that every child should grow up in conditions that promote health, peace and dignity. It believes that every child deserves to be happy, healthy and free from hardship. Its goal is to ensure that all children have the water, health, education, care and protection they need. Contents: UNICEF Canada Mission, Organization, Global Schoolhouse (Education Support Programme), Careers (Human Resources), How You Can Help, Work (Development, Emergencies, Global Action, Resources, Latest News), and Kids Room. UNICEF officers work together with communities, local governments, and service providers such as midwives and teachers to find solutions to the problems affecting children. Funds raised by UNICEF Canada are donated to UNICEF programs in Africa, Asia and Latin America.

WHO - World Health Organization.   Information on WHO is rather scattered. Check out the following links:

How the World Health Organization Works from How Stuff Works.

World Health Organization (WHO) from Wikipedia, the free encyclopedia. A specialized agency of the United Nations (UN) that acts as a coordinating authority on international public health. Established on 7 April 1948, and headquartered in Geneva, Switzerland.

The World Wide Fund for Nature (WWF) from Wikipedia, the free encylopedia. "An international non-governmental organization for the conservation, research and restoration of the natural environment, formerly named the World Wildlife Fund, which remains its official name in the United States and Canada. It is the world's largest independent conservation organisation with over 5 million supporters worldwide, working in more than 90 countries, supporting 15,000 conservation and environmental projects around the world."

WWF - World Wildlife Fund - Canada. "World Wildlife Fund is dedicated to saving life on Earth through the conservation of nature and ecological processes. "The goal of WWF's national program is to protect Canadian species and spaces at risk by supporting high quality field projects and conducting bi-annual assessments of Canada's biodiversity." "The goal of WWF's North American program is to protect species and ecosystems that are shared by Canada, the United States and/or Mexico."